A note about the Mystery Boosts.
Most of them are confirmed to be working and are available while few may be outdated.
However, their requirements (as presented on the planner) may be inaccurate (not on purpose). Surely enough, some of their requirements are omitted (that's on purpose).
Any feedback on the validity/requirements of the mystery boosts will be greatly appreciated.
Thanks.

Also, Sight Range might not work on your current save - you'll need to reset the build.
Weapon Range stat will be implemented once Weapon slots are also done.

Here's a character planner I've been developing for some time:
https://fonline-reloaded-s4-geck.onrender.com
Open spoiler to see some images
Spoiler: show 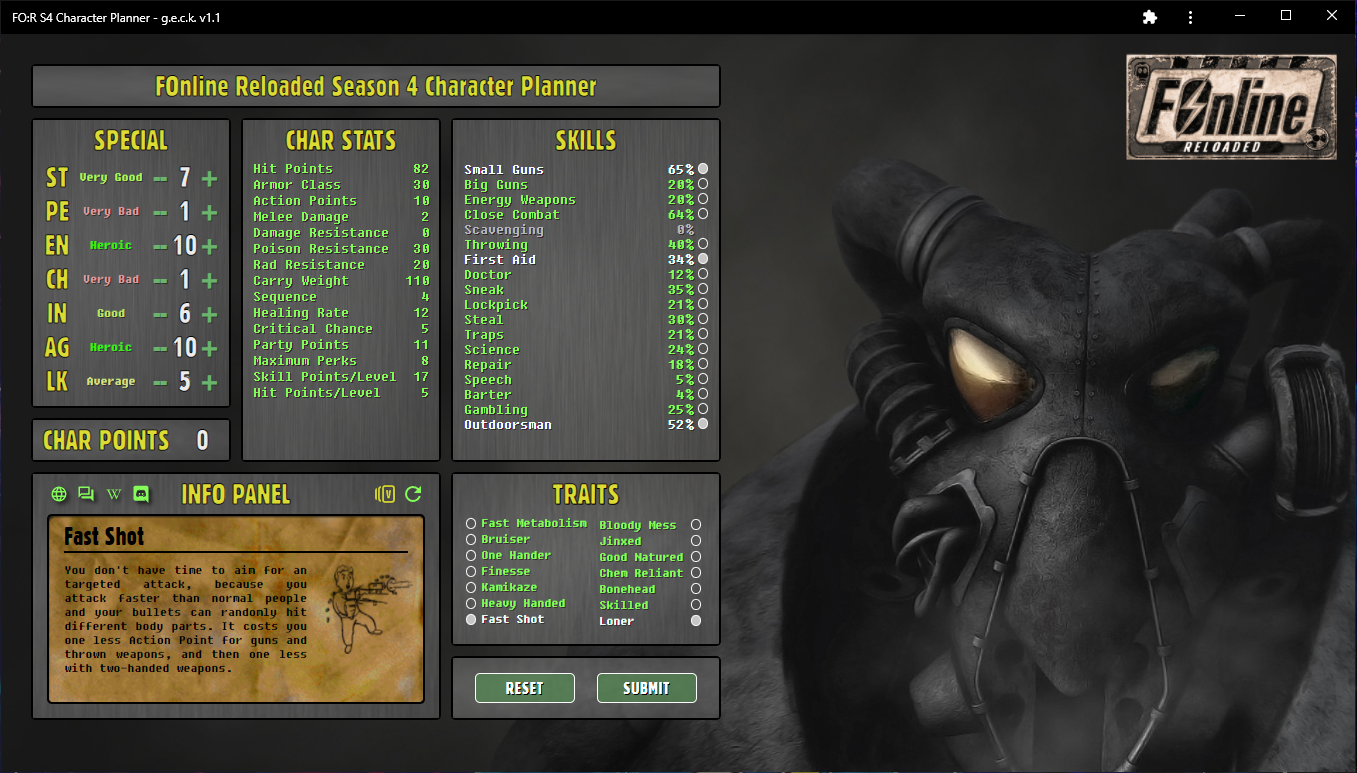 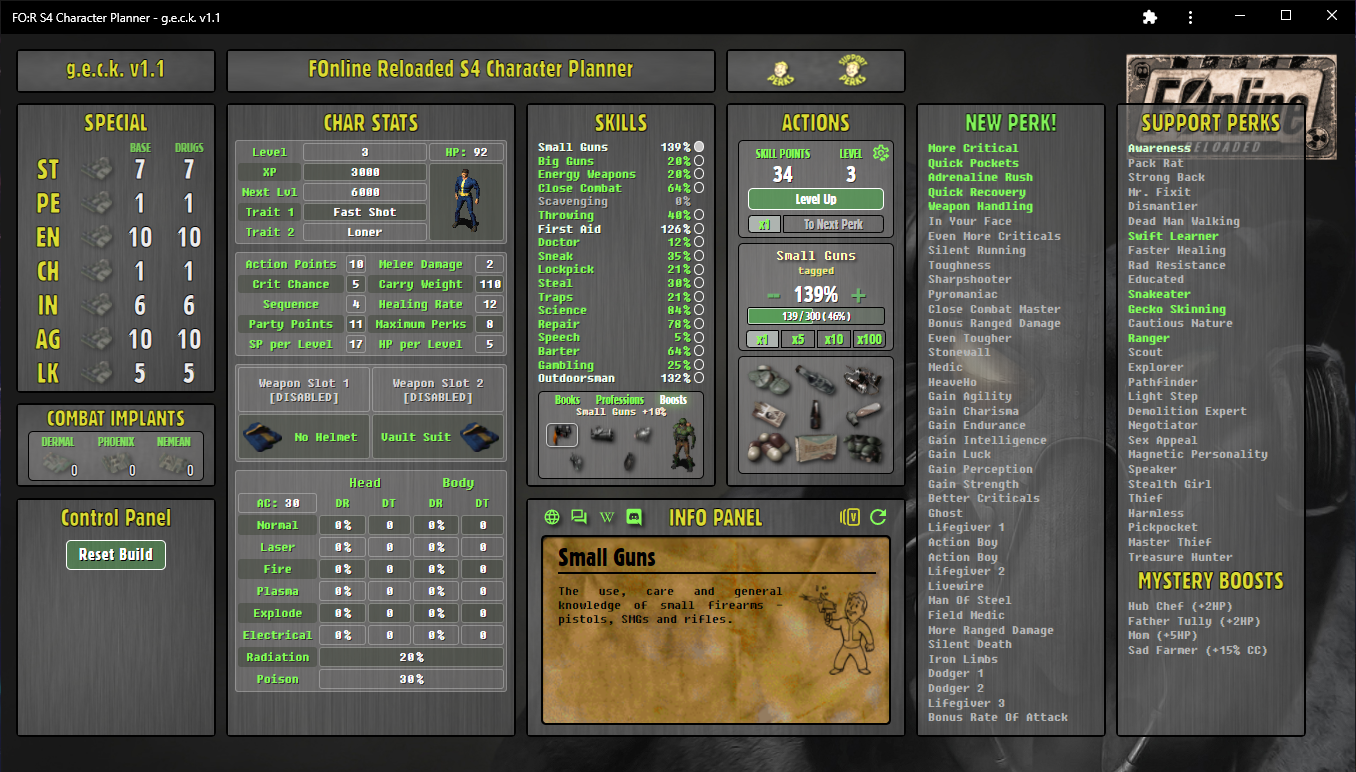 Overview
FO:R Character Planner is a simple web application which allows you to plan your Fonline Reloaded character build. It's a static app and it can be used offline.

How to use
Online - You can use the tool online – just open the link above.

Offline - You can also use it offline - just install the planner and use it like a native app. Works both on desktop and mobile. Here's how to do this:

Huge thanks to Henry, Medics, POWERPUFF and all other nice people who helped me a lot along the way!

So, that's it. I hope you enjoy the planner.
Once again, I would really appreciate any feedback/suggestions/bug reports/etc. you might have. Please, post in this thread, PM me or find me on Reloaded Discord - Arronax#9276
Thanks.
5

Feel free to take and use anything you find worthy from this video!
And thank you again for your never-ending awesome wiki job you do!
6

« on: November 04, 2020, 08:49:54 am »
Greetings, fellow wastelanders!
Almost an year ago I made a 2h30m long video tutorial on how to get started on Reloaded. Although I shared it on the discord channel back then I delayed posting it here cause I found a couple of mistakes I wanted to fix, and I also wanted to include some additional information (as some fellow players noted it would be helpful). Unfortunately, life happened and I couldn't find the time to do so in the following months, so, being so long overdue, I finally decided to post it here.

Here's also the Crafting Calculator which is included in the tutorial (see attachment). It's made in Open Office, and it's basically a formulated spreadsheet which allows you to compute the amounts of materials you need to craft stuff. It could have some inaccuracies, as well as a couple of missing items. Please, if you find any - post a reply here and I will try to add/fix the issue. Thanks!

I hope all this will be helpful to new players as well as to some more experienced ones.
Please, feel free to reply with any questions, remarks, notes and suggestions you might have!

Kilgore:
There might be some server downtime tomorrow (03/03/2020), due to planned network reconfiguration/upgrade.

News and Announcements / Re: Donations Info

Suggestions / Re: Set of suggestions

I thought you were well aware of bots/clickers and scripts people are using to farm barley/special encounters/brahmin shit/tobacco/other as well as use these in order to farm money from farms.

I completely agree. Those people are in almost every game and they take no interest in anything else but automating. If you make it impossible (or not worth the effort), they would change the game, not their attitude or game style.
I've never used such methods, in any game, so I don't know how exactly to protect features like these, but I would rather try to make farms very difficult to be automated than to make their rewards so unappealing.
13

Suggestions / Re: Set of suggestions

« on: March 14, 2019, 02:33:12 pm »
I agree with all the suggestions except the two related to Player farms.
I also agree that multiple co-owners is a bit too much but it could be changed to something like Transferable ownership, which could cost a lot (in farm bucks, like the worth of 10cycles or more) and take a full real day to be completed, rendering the farm unusable during this period. This way only one char could use the farm at any given time, but you could still level different chars in the same farm.

But no, I don't think farm rewards should be nerfed. I agree it's abusable by autoclickers/automation scripts and it needs to be adjusted so that it wont be easily scriptable, but why nerf it cause of that? As far as I know those third parties are not allowed, and the devs are not making a game for auto clickers, so why would you use an autoclicker in your example?
Also, I remember I had to farm barley for a long time before I could plant all 500 crops - there were always other players at tobacco farm, and even when there weren't - it just doesn't go that fast, barley picking. In a more populated server "spawning" a new farm every 24 hours doesn't sound very plausible to me.
Some other activities yield much more caps and xp than farms - like the good old desert levelling for xp, or chain some mutie quests, sell everything and there you go - more caps than your couple of farms could produce for the same time.
Don't get me wrong -  I also consider having a farm conglomerate as a little OP, but then I think about how much dedication and time it takes to get 60k barley and 60k dung for ten of them. So I think it should be tweaked/adjusted rather than blatantly nerfed. Like that Rancher - butchering brahmins, then trading the food for the other resources.This is what needs to be changed imho. It would make more sense if you had to chop a wagon of wood and provide some water barrels from time to time.

Edit: Also, shit could be limited in towns, and new location(s) could be made on world map. Like Wild Brahmin Shit Fields, or Dunghill, or something. More player interaction in an unguarded location.
14

News and Announcements / Re: Donations Info