As some of you know, every existing FOnline server is using engine created by cvet. This guy is working on it since 2006, and we are using his creation for free ever since FOnline: Reloaded was launched. He even released engine source for FOnline developers (and everybody else) few years ago, allowing for further modifications.

Unfortunately, last stable engine version is very old, and every long-running FOnline server uses it, sometimes modded a bit. We could surely use something new.

Now cvet is asking us to join his effort to upgrade FOnline games to the new and shiny engine version and he's planning to release stable engine version soon which is a big news. But to dedicate most of his time to this project, he needs support, so he doesn't rely on some side jobs that reduce the time he can work on FOnline.

I decided to support cvet on Patreon, and I encourage you to do it as well - of course if you have some spare bucks to support FOnline. In my opinion, this is much more important than donations to FOnline: Reloaded or any other FOnline server. We simply owe it to him, and whole FOnline community may benefit from it greatly.

Here's link to his Patreon: https://www.patreon.com/fonline

Closed suggestions / Re: Increase the speed of motorcycles

- Players drop all items upon death in Glow - watch out!
- Modified weather mechanics in Dayglow,
- Player farm cost decreased from 300.000 to 50.000 bottle caps,
- You can no longer earn bottle caps and experience from player farm,
- Alien Blaster and Bridgekeeper's Robe added to random encounter caves,
- Bridgekeeper's Robe (non-statted) removed from Dayglow spawner,
- (Poisoned) Throwing knives can be used in melee mode,
- Knife and throwing knife damage increased slightly,
- Chosen tabs visible on worldmap,
- You can use /art/intrface/factionIcons/test.png to test faction icon on your factionless character,
- Motorcycle speed increased from 65 to 120,
- Changed music in menu.

Please run updater to get new faction.ini file in reloaded002.zip.
7

Fixes:
- Changed client message about client being outdated to something more appropriate.
- Fixed a bug where container filters would not work when caps are inside.
- Fixed missing T-Ray dialogue.
- Fixed a bug where a character that died on worldmap would not respawn.
- There is a message info when character cannot equip weapon with current skin/armor.
- More strict Day Pass check in Vault City.
9

I'm going to follow 2238 policy as far as source is concerned, so in case that project is closed some day, it will be released for anybody that wants to do something with it, or continue it, or whatever.

I think that atm if someone wants to do anything (map, dialogues, quests, new feature, item, whatever) then he/she has lots of tools to complete it. mojuk even made a version based on FOClassic if someone wants to base a game around it... what else is needed, really? I know that a-bit-outdated-by-now version of Reloaded S3 was leaked but I don't support it and I don't approve it, especially in the form it was posted.

And yeah if 2238 source wasn't released then there would be no Reloaded but please also remember that while 2238 was running, no parts of it were shared that I know of.
10

Important note:
- You need to update the game client via Updater.exe. 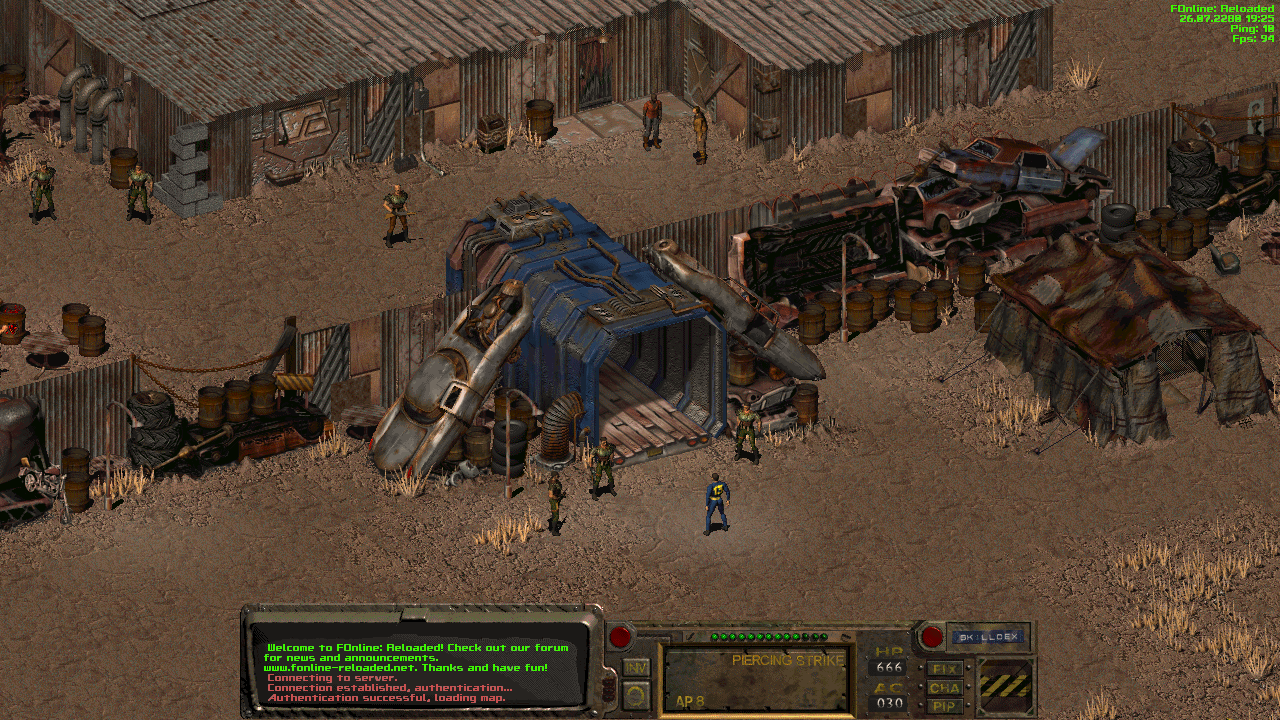 Important notes:
- You need to update the game via Updater.exe and delete /data/cache directory before launching the game.
If you have problems with that, you can redownload client from client download link.
- Custom interfaces need to be modified: find & replace all "Gmap" entries to "Worldmap" in default.ini and faction.ini files.

Fixed a bug with armors being not displayed properly.
Fixed a bug affecting Scout perk, FOV etc. when game chat was inactive.
13

Closed bugs / Re: Tattoo artist does not provide tattoo after payment