Bugs / Quest Marker does not appear.

I looked all over between Shady Sands and Reno and could not find the place, even though the log said it was marked on my map.

I went back to the quest giver ("Fairweather", in the soutwestern part of town) and could not retake the quest.

I found the marker- it was way over on the right side of the World Map, 5 squares SSE of Vault 15.

So not a bug, just misleading text. 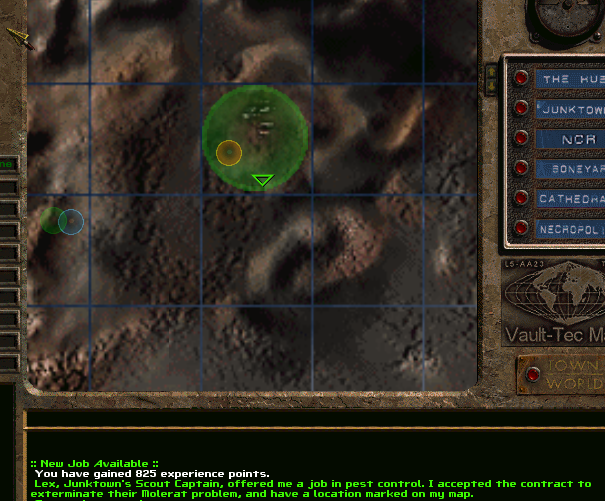 General Game Discussion / Does Karma do anything?

I've been testing some parameters. 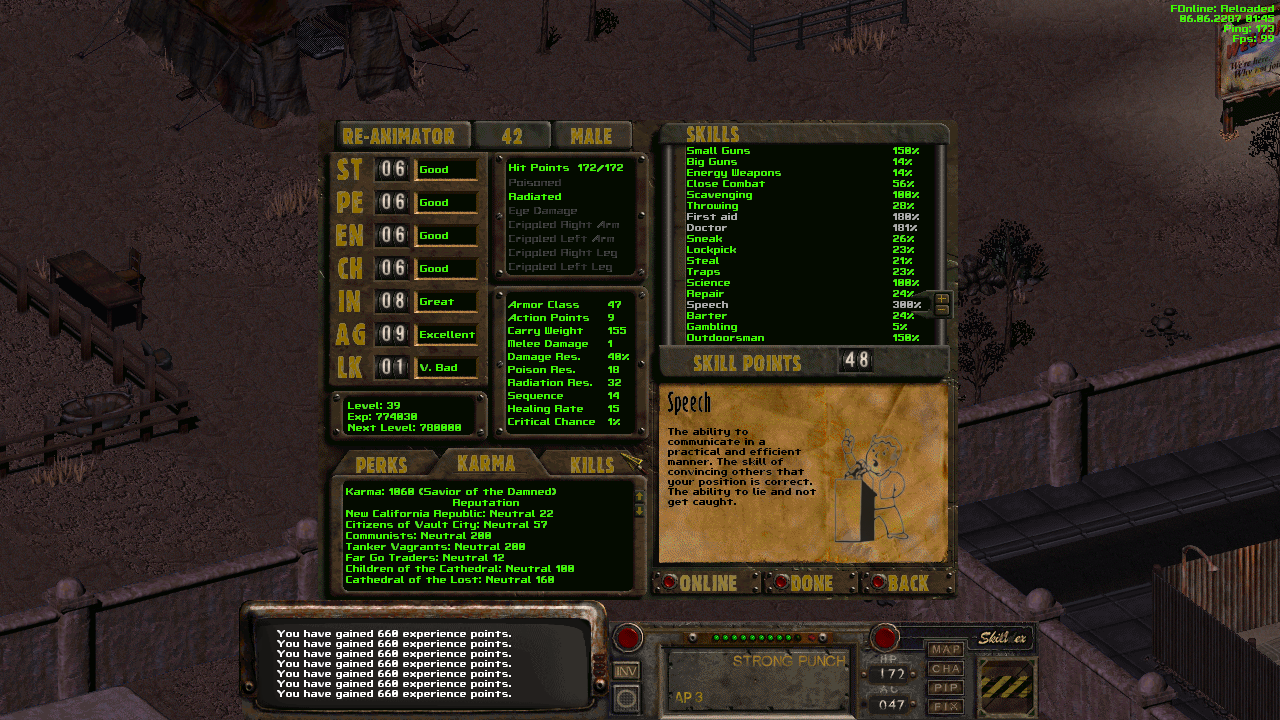 General Game Discussion / So it is a New Year. What shall we do now? 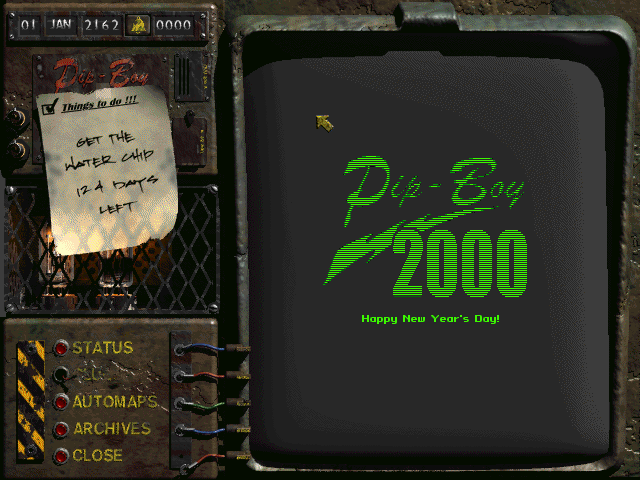 I suggest we test the AI, just as a gesture to the devs- because we *are* supposed to be testing this game.

I was suspicious- why would somebody sell that? Is it a rare saleable item spawn?

I bought it anyway, thinking it would at least be a rare collectible.

When I got back to my tent I decided what the hell- read it (I have Small Guns Prof lv 2).

Blueprint disappeared, and I checked workbench to see if the Pancor Jackhammer was on the list.

It was not. I was disappointed but not surprised. 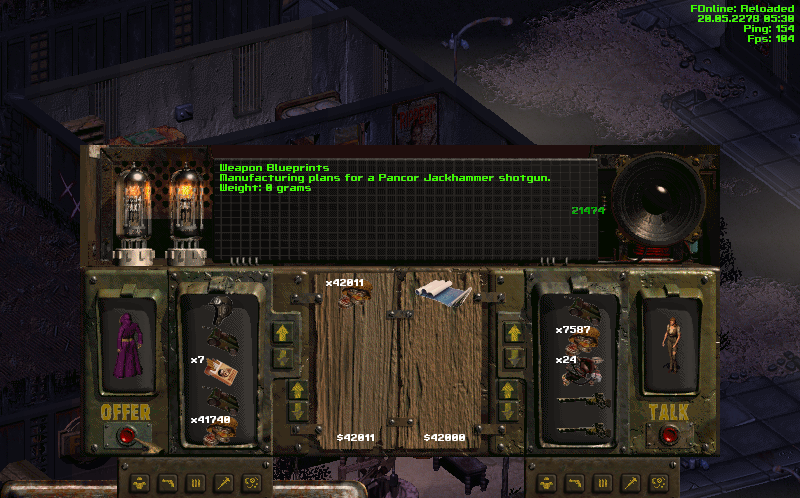 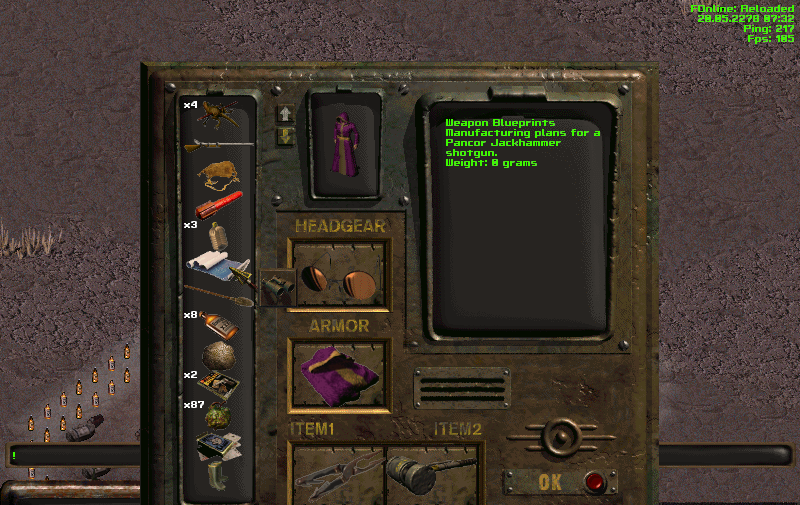 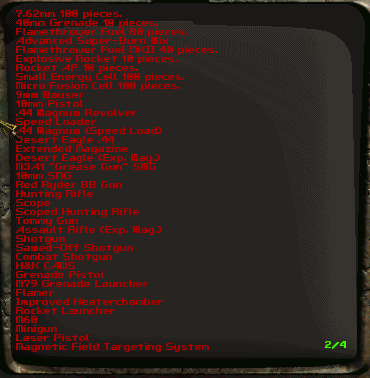 Is this really a bug, or playful trolling from the Dev Team?
6

There was no Easter Egg triggered when that happened.

I didn't think there would be.

It would have been fun to be teleported to a random place upon doing so.
Or get a free respec.

So there is no prize for being an autistic tester? 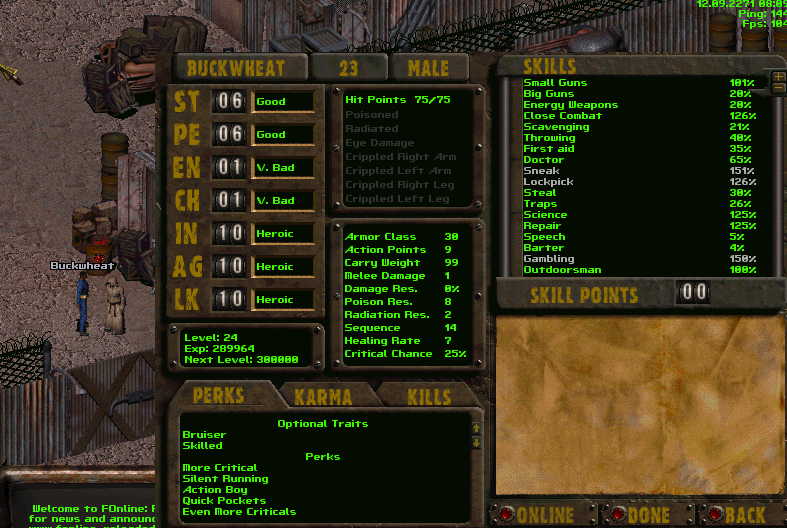 Even more "fun" if we all shovel enough poop to get Mr. Handy skins from the Barber.

Big piles of all tools, ammo, weapons, etc. (the still in starting area and the crate by the tribal's tent in hunting grounds are safe storage)

In effect sabotage the tutorial.

Once maxed out, see if we can keep the guards dead.


Just show up and get started.
The outside is nerfed, so why not stay in the "second vault"?

Steal is not useful or fun anymore, so replace it with something similarly shady, but useful.

Simple version: when bartering some types of items, you get a discount or sale price bonus.

Stack BMC with Barter or add it to Reputation, or both.

This would apply to drugs, lockpicks, explosives/mines, detonator parts (if in a store- dialog purchase would require more work to implement), and special items like HQ EP, Polymers, HQ fibers, access keys/cards, oil cans, and possibly some high end gear. Again, this would just be for bartering in shops, as modding dialogs would be too tedious.

Not sure if Black Market should be a faction, or what do with their faction points.
Maybe even make those FP the only way to increase BMC (players with Steal already would get a 1-time map-over of points).
Possibly allow bartering of the affected item types increase BMC, similar to Scavenging.

Or do something else.

Then what about Harmless Perk?

Double the "parley"?
That is, NPCs in encounters take twice as long to react. (plus one second?)
Also positive reputation would decay at half the speed, and negative at twice the speed.

"Aw, that one is just so harmless!"

Settlement is easy but a bit tedious.

1. You cannot keep anything when you leave, even what you are wearing or holding. You get a few things on exit based on quests you complete- like knife, tent, tool, etc.

2. Containers continually refresh with bits of loot. Do not store things in containers. See #3.

3. The Still, in the building to the right of entrance, is a stable container. It is almost always loaded with tools, weapons, miscellaneous quest items, armor, etc. This is all left by players. (I started it

There is also a crate by the Tribal in a tent in the far southwest of the Hunting Grounds which is a stable container. It is mostly full of meat.
Near there there are often spare tents, broc flowers/xanders, and sharpened poles to help with the "tent quest".
Also left by players.

4. Don't hoard in settlement- you can't keep it, and containers aside from the 2 I mentioned will delete everything.

5. The "Thrasher Quest"- guy takes your jacket. Make sure it is not a good one (+carry weight, poison ress, etc.)

6. Trade radscorpion tails to doctor (in side room of crafting building just north of entry) for antidotes.

7. To left of doctor is a tent with a guy selling tools. You can skip this or shovel poop for the caps. You can't keep the caps when you leave.

PS: please don't load the Still down with heavy stuff like sharpened poles, ropes, primitive tools, meat.
There are enough tools and weapons stored now to supply everyone who comes through, especially if they donate their stuff on the way out.

Just stock ammo and materials, only replacing gear that is deteriorated or removed from game by noobs/etc. who put stuff in containers or try to leave with it.

PPS: Be careful with the Barber- it is possible to get a skin that will completely mess up your ability to function. Especially if you do it right before you leave.

AFAIK there are only 4 things you can do with Uranium/Refined Uranium: Sell it, throw it, or use refined uranium to make MFC or Plasma Grenades.

How about a couple more things to do with Refined Uranium?

Explosives aside from rockets/grenades/grenade bullets/dynacord stick are limited to dynamite, C-4, and landmines.
Nuclear bombs are out of the questions, and Fat Boys (ala Fo3/4/NV) would not be reasonable.

So how about a "Fizzler"?

It would have the same detonation method as C-4.
Explosive damage would be the same as C-4, but the explosion would have twice the radius and also deal radiation damage over twice that radius. Also 25% chance of blindness and 15% chance of knockout.

Rad load (the affected individual's Radiation Count) would be twice the explosive damage (using rad resistance % instead of explosive DR), and this effect would linger for 51 seconds after detonation, inflicting a fading load of radiation every RT second. This would be 1/2 the initial burst the first second, then 1% less than that each second for the remaining 50 seconds. So run away!

In turn-based combat just make it 3 waves of radiation (once every 10 seconds): half, quarter, tenth of initial rad load.

For graphics, just use the graphic of the nuclear bomb in Cathedral Vault Basement, but reduced to inventory picture. Ground picture could just be the same but even smaller (Or a C-4 blinking in a rainbow of colors) . Explosion is explosion graphic followed by EMP grenade graphic repeated on all affected hexes.

This would be fun to try, but not ever economical to use.

Use Flamethrower graphics for inventory picture and gun in use. Effect area gets EMP grenade effect.
Sound would be the car activation sound (revving up).

This would be loads of fun, even if horribly impractical.

Anyone killed by radiation would get the radiation death animation.
ololol
13

DUE TO LEGAL IMPLICATIONS DERIVING FROM THE RULER OF THE WORLD (KILGORE), PLANS HAVE CHANGED [STOP]

THESE NAMES WILL NOT BE INCLUDED IN THE MASTER LIST [STOP]

Game Help / How long do I have to complete quests

What is the time limit on completing Ruined Military Bunker, for instance?

THESE NAMES ARE FOR THE INVITING OF FRIENDS [STOP]

SANTA KLAUS IS A FRIEND TO ALL [STOP]