News and Announcements / Re: Server wipe

At S2 1h of grind could give 1h of playtime (so to speak), at S3 there is around 3h of grind to get 1h of playtime. Session2 was too easy in terms of gaining gear (but allowed to do a lot of PvP), but Session3 is WAY to grindy when speaking of gearing character.
2

Game Help / Re: Special Encounter: A tree and a house?

Game Help / Special Encounter: A tree and a house?

Toxic Caves / Re: Does anyone still play this?

I did forced myself to try that 3rd season. TS ain't THAT bad I was writing, but junk usage is imho way off chart. In earlier seasons I did cursed a lot easy access to weapons and armor, but now I guess its kinda hard, so it fits "fallout" theme. But I am 101% sure that nodrop takes so much from this game that there is - like you have wrote - no satisfaction from getting cooler/better gear. I was slayed in caravan 5 or 6 times by human NPCs - well, okay, I will go pee and get on the road again. It used to be a freaking pain to be looted by NPC... now its just... meh. I posted on forums just when 3rd session begun - there is no thrill whatsoever in this fallout world.

I will be playing occasionally.
8

EDIT: I had to download clent again and run it on fresh folder - it worked.
9

Toxic Caves / Re: Does anyone still play this?

« on: March 12, 2018, 04:07:05 pm »
I don't feel wasting time writing this - I have high hopes that there will be change for No Loot system, that's all. It's the same thing I had high hopes as a teenager to play and compete online with other players - that dream come true when I found FOnline. You should see my face when I loged for the first time. Since last September I visit forums and the game to see if there is change that will give me what I (and not only I) want to see

I know you aiming at me. At some point I used  1 (one) account to run through desert in order to find SE, which gave me 5 SE during ten days and It was NOT against rules, but I believe (and admit) it was abusage - turned out with ban for that account and I agreed with that. Second account was played without any distortions. So, if you hint that 1 character logged for around ten days was boosting playerbase count for almost 2 years of Season 2... that makes me laugh

By reading your post I noticed one thing, in history of mankind there was a person who ruled some part of globe and spoke like you: No people, no problem

At this moment FOnline has 75% player base shortened, and you are happy because people don't bitch/do stupid post? Well, forum seems to be abandoned, game is deserted, and Fallout 2 stand alone seems better option because of story (and some much better gear gained there). I will tell you a secret: if there will be no players at all, there will be no post/messages ect. Great, don't you agree?

There were some problems with Session 2 (I don't know the talks about cheating, because I never knew about cheats here), but seems S3 did good job in getting it fixed and I liked new features. Except no loot. And I am speaking from position where I can honestly say I am average player in terms of skill, thus this I was cannon fodder for most experienced players. I produced more gear then I could get of players by killing them and I still liked it. The thrill of a hunt was essence of Fallout online. Since it's gone and 75% get off board, seems not only I was here for that feature.

Actually, things are going great over Discord. It's only the Forums that suffer from such negativity. Most people now are very pleasant to deal with, and interact with. It's very refreshing. In game atmosphere has improved a lot too! We've even started hosting regular Player Events with the Community! We've having a blast! 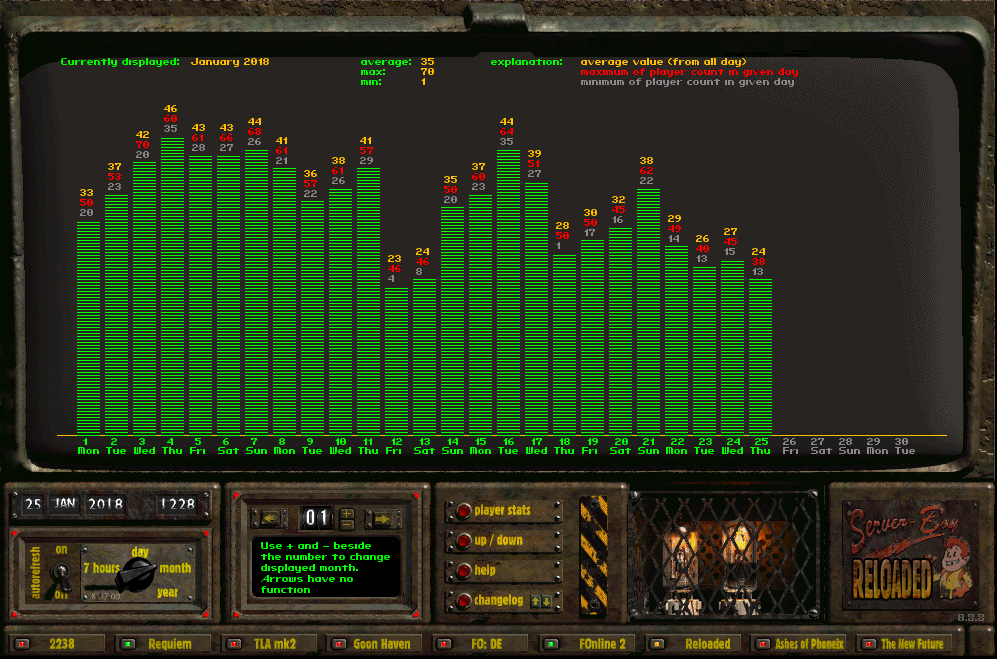 That's it - number says it all. 2017 January it was 88 average and 2016 102 average players. And it was with season that lasted long time. I spoked with two friends I've played S1 and S2 if they still play and response was "no lot - no thanks" in both cases. Also we spoke about crafting and junk usage (I don't mind it). basically, I logged onto forums to see If I was wrong. If I would see same +/- number of average players It would mean me being pissed-off for no loot system is just pure ranting and I didn't understood changes. but seeing playerbase dropped by 70% shows clearly that that was Bad decision. Pity, becuase I still wanted to play the game with new features...
13

« on: March 10, 2018, 11:14:24 am »
Hm, just dropped by to visit server and to see if players love the changes (no loot, in particular) and since September 2017 playerbase dropped by 70% of what Season 2 used to have. That was BAD change. Yes, I said that before multiple times, even when S2 prima aprillis fun was made for No Loot and yet most people bitched at me, arguing that no Loot is a must. No, my friends:

I will repear shortly. I started play F1 and F2 in 1996 and I loved those games. As a teenager (I was 16yo that time) i dreamed to have it multiplayer (well, there was no internet in Poland, but young boy can dream of his own party in the wastelands). So, when i found FOnline I was more then happy. Game was HARSH for newbies, many things worked different then in original games (F1 and F2), but the thrill of being pray or a hunter made it worth of play. In season 2 I had lots of fun with my friends from Peacekeepers, and I wanted to see some changes in upcoming Season 3. Well, PVE changes were great and PVE change of Hexing was even good too, but No loot killed this game for me - I see no point for playing multiplayer game that feels like singleplayer, where interaction between players is based only on some trading (if there is) or dumb shooting.

And if there are some players who LiKe this change, well maybe that 35 average/day shows how good that change was.

« on: September 25, 2017, 06:23:29 am »
Wichura, this particular game has its fans. This particular online mod has if fans. Combine both and you have playerbase. I don't care if somone reads this or not - I gave feedback. Player above me gave feedback as well. He pointed that game is newbie friendly. I will add one for this:

Was this game made for newbs? Lets all play F2 and enjoy great PVM and quests... save system and no need to talk dirty with other players (aka no loot - no risk).

And there is no statement about implants. S1 had added implants 1 month before wipe. S2 had them for 1 year. And they all come without any notice prior change, which is f*** because I have bought in S2 4 imps for 22 mil caps - shitload time was spend to get them and two weeks later thy were buyable in SF... I could implant at least 4 characters...
15